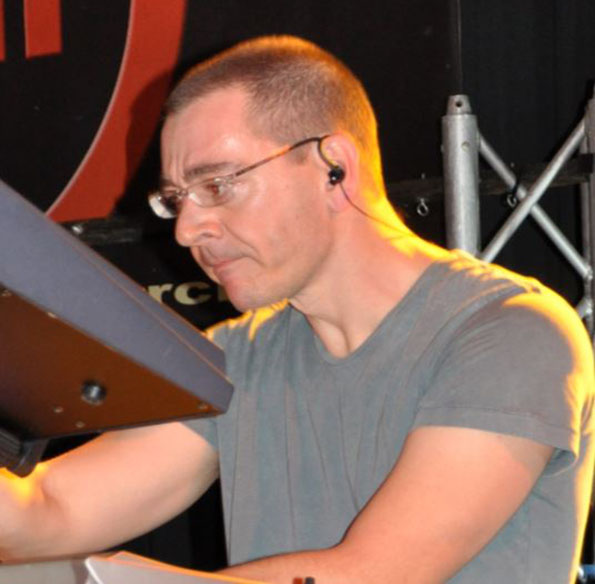 He plays since 8 years old. He falls in love with the organ. Struck by the grandeur of the instrument and the strongly evocative sounds, gives all his energies to the services of musical accompaniment during any liturgical service. Corals and not. For years.
From 1983 he begins studying the piano.
From 1983 to 1989 he sings for the choir of the CAI section of Bovisio Masciago, supporting numerous concerts both in different regions of Italy and abroad, with a turnée in Romania. He obtains the middle school diploma and the 5th year diploma in piano at the G. Verdi Conservatory of Milan.
In 1991 he suspends his intensive piano studies at the beginning of the degree course in engineering.
In 1992 he is keyboard player for Silver Key, initially rock and progressive rock cover bands, with whom he plays until 1995, the year of production of their first official demo.
From 1996 to 1998 he plays in FALLI FESSI, rock bands with a large cover repertory.
From 1998 to 1999 he plays in FUNKYVIBE, soul funky band, with which he performa intense live activity especially in Milan and hinterland, also recording their first official demo.
In 2001 he returns to the Silver Key, this time tribute band of Fish and Marillion.
In 2006 with Silver Key and new line-up, turned to promotion of original music.
From 2006 to 2007 he plays with ROAMING REFERENCE and records their first EP "Laid Back", easy instrumental jazz.
In 2009 he records the first CD with Silver Key, "IN THE LAND OF DREAMS", with Ma.Ra.Cash Records.
In 2014 he records the second CD with Silver Key, "THE SCREAMS EMPIRE", with Ma.Ra.Cash Records.
In 2016 he produces and records together with Roberto Buchicchio and Alberto Grassi (Bass Guitar) an EP of electronic fusion music based on the Solaris novel by Stanislav Lem "Solaris a novel in music".
In 2017 he founds the BLUE MAY STUDIOS for composing and producing music with Roberto Buchicchio.
On 2019 records the Third CD with Silver Key, "THIRD", with Ma.Ra.Cash Records.

Over the years he played occasionally with other artists, accompanying, recording, supporting, arranging and having fun, as always did.